I was head designer, maker and performer upon this large scale moving puppet. 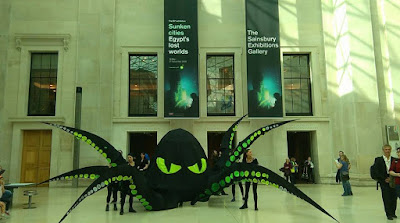 The British Museum receive sponsorship from Oil drilling company BP, the Organisation 'To BP or not BP' have staged a year of protest against this bizarre collusion of Arts and Culture with ruthless greedy business. The 'BP Kraken' is a huge puppet symbolising BP's continuing underhand practice to theatrically bring the subject into the minds of museum goers and put pressure on the British Museum to cease this alliance.

Reactions from the press:

Email ThisBlogThis!Share to TwitterShare to FacebookShare to Pinterest
Labels: BP, Kraken, Puppet creation, Puppet design, To BP or not BP